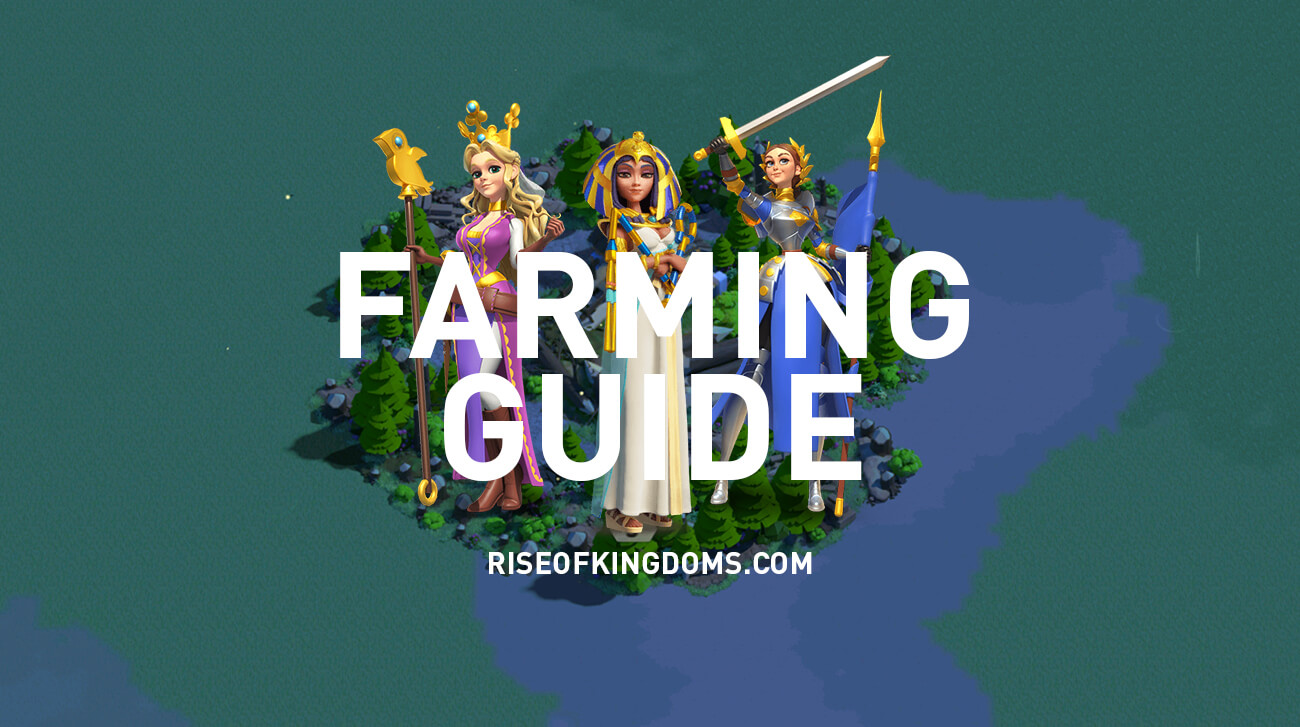 This is going to be a massive guide to farming in Rise of Kingdoms!

We are going to be giving you guys 9 amazing solid tips and we are going to also answer some of the most asked questions about farming like:

So we’re gonna be tackling all of these in this guide.

This is a big question!

So I want you guys to think about what your playing style is.

So the thing that you need to really consider is your playing style: A grinder or a casual player.

So if you’re a grinder I do, suggest that you do this and it’s going to be very easy for you to start your farm account by going to your Avatar => Settings => Character Management then you can start a new character on the same kingdom.

Now another thing you can do is to purchase a device or if you have an extra device laying around you can also use it for the farm account, to transfer resources to your main account without having to keep switching characters between your accounts.

It’s also very easy to have multiple farm accounts at once if you are playing Rise of Kingdoms PC.

So when you first start your farm account, you’re gonna have to pick the starting civilization.

So if you’re really trying to maximize your food farming speed then you can pick Rome.

You would have a great amazing gatherer commander, which is Joan of Arc, to start with and you’re going to have a lot of sculptures for her so this may be a very good option to get into.

I don’t recommend this for the initial stage when you’re making your account. I can recommend it when it’s like in the later stage of the game, when the resource buildings are higher. That’s the only time that I think that you can actually benefit out of that buff.

Japan is something that you want to consider if you are wanting to gain a lot of Gold or want to gather all of the resources at once.

If you are in need or really trying to get a lot of Stones, Byzantium is probably going to be your best bet.

Stone is crucial especially in the later stages of the game. There are also difficulties with the commanders. Cleopatra is the only commander that has extra buff for gathering Stone currently so Byzantium is another opportunity.

My suggestion: Start from France and then you get a nation change at level 10, you can either remain for France or you can change to Rome or Japan.

I highly recommend you using Japan afterwards because this is going to be very universal. Joan of Arc don’t have any specific gathering buff, her buff is more universe so going for Japan is may be a good option for you.

I want you guys to pay attention here.

From VIP 1 to 6 you guys can see a HUGE increase in gathering buffs. You also unlock the second builder permanently at VIP level 6.

I would suggest to invest your gems into getting to at least VIP level 6 before spending them on any thing else.

Focus 100% on the Commanders that have the

Also, you would want to take a look at Commanders that have the

Tomoe for example. They have a talent called Superior Tools, which is increasing the Gathering Speed of the troop by 15% at level 3. 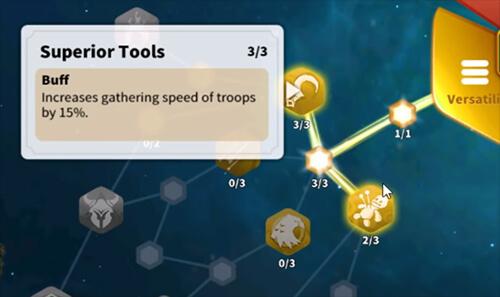 Just work on these commanders and get as much Sculptures as you guys can. Get upgrade items for them and then scale them up.

Here is a trick for

I’ve bought all of the sculptures for her through the Expedition and it’s really worth it because Constance gives the resources bonus after you complete gathering. When you max her out, she is one of the best gatherers.

Also you need to pay attention with the

This is my recommended Gathering build:

When you are done with the Gathering path, I suggest that you try to get the Fresh Recruits If it’s possible to increase your maximum army cap.

So when you are going to send your farmers to farm into the Alliance resource nodes, you can have more resources and can just leave it for a period of time. 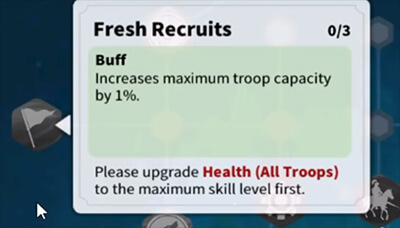 You guys should participate on that strategic reserve event with your farm account to get more Sculptures for her.

The reason why you want Cleopatra is to maxed out because of this gift of the Nile, and when Cleopatra finishes her gathering, she will receive an additional resource pack so that’s going to be crucial

You should focus on Siege troops for your farm account because the siege units are the ones that have a lot of load, much more than other kind of troops.

In addition, there are talents like Modified Axle that increase the speed of your Siege units, meaning that they can move a lot faster. Thus increasing your farming speed a lot!

When you have a lot of Siege units and you have the Integration ability, you can get the Fresh Recruits talent to actually increase the capacity of your troops.

That troop capacity it’s going to be massive amount of the load that you can get and I would send that to the Alliance resource nodes.

Also, work on your Trading Post to get them to as high as possible because of the tax rate. The higher the building of your trading post would be, the lower the tax rate can be. And also you can send more capacity per dispatch. 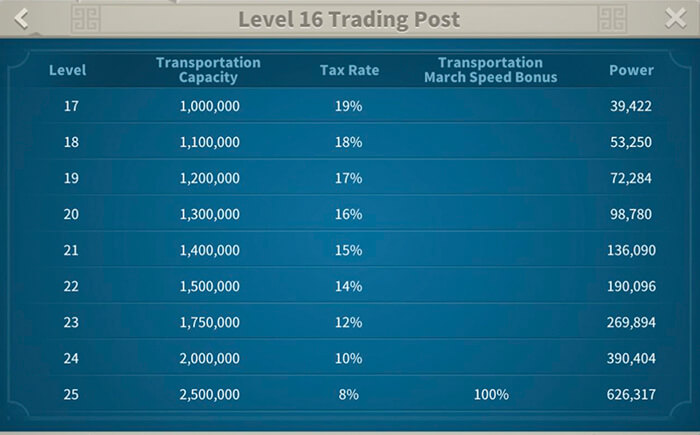 There’s actually two choices on how you can transfer resources

Basically you have to leave your current Alliance for a few minutes, join the farm Alliance and then transfer the resources.

Upgrading the Trading Post is a long-term investment and it will pay off.

Having A Farm Alliance

By having this farm Alliance, you guys gonna be able to focus on upgrading the farming technology.

You guys don’t really need to work towards the Territory or War techs as much but except unless you need to build more Flags or get more members.

When you have a farm Alliance, you’re gonna be able to have Alliance Resource Deposits.

This is where you guys can bring all that Siege units lead by Sarka with the Integration path and troop capacity boost.

Constance would be a great Secondary commander If you focus on farming Wood.

There are different types of ruins that you guys can gather but you should only focus on ones that give you Gathering Speed buffs. 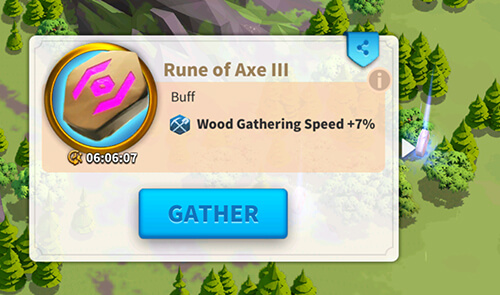 Enhanced Gathering items together with the runes to maximize your farming speed.

You can get these farming boots via the Alliance Shop, the Mysterious Merchant or by finishing some Events.

By farming Barbarians, you can gain a lot of Gems. That way, you can convert those gems into VIP points as mentioned earlier.

Not only that, you are also gaining other resources here.

Peacekeeping Commander, you would have this Trophy Hunter Talent to earn free Resource Packs. 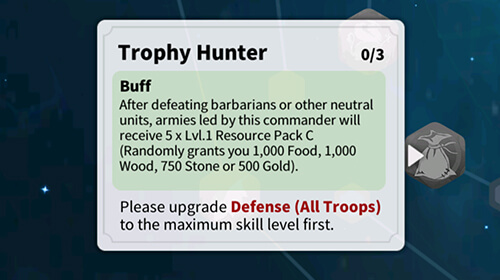 When have a lot of the Resource Packs then you can just transfer those resources to your main account.

Tip: You don’t need to fully upgrade the first 6 farming Techs, you can work on them later.

You should just focus on the Economic technology. You would probably disregard the Military technology because your main goal here is farming.

Try to unlock the Machinery tech as soon as you can because it increases gathering speed for all resources, a lot.

After that, you want to focus on specific type of resources. Food, Wood, Stone or Gold, based on your needs.

Last ones you should focus on are the techs that increase the production in your city. 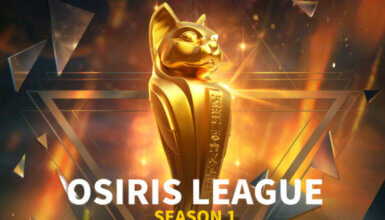 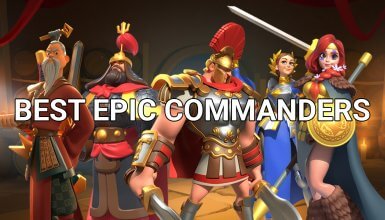 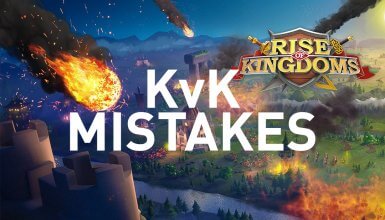