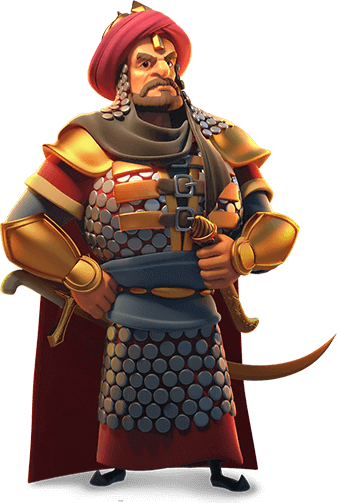 Born in 1259, Osman I entered a world desperately in need of a leader. In Eastern Europe and the Middle East several great empires were declining. The Byzantine Empire—the eastern Roman Empire based around the capital city of Constantinople (Istanbul)—had endured for nine centuries but was beginning the long process of decline. During the Fourth Crusade of 1204, Constantinople fell for the first time to the Latin knights of the crusade. Impregnable, due to its strategic geographic position and defenses, the fall of the capital city symbolized the declining power of the Byzantine emperor. On the eastern flank of Byzantine lay the Seljuk Empire, consisting of eastern Asia Minor, Syria, Mesopotamia, Armenia, part of Persia, and western Turkestan. But this Empire too began to lose control of its possessions due to the invasions of mongol leader Genghis Khan. After the decisive battle of Kozadagh ended with victory for the Mongol invaders, the Seljuk sultans were reduced to vassals. The Mongol khan, interested only in securing annual payments from his vassal states, did not implement a system of control and government over the former Seljuk territories. With Byzantine control diminishing, Seljuk rule subjugated, and Mongol leadership missing, a power vacuum resulted in Asia Minor.