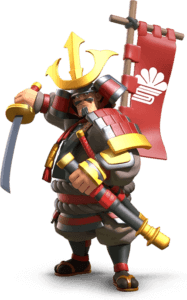 Kusunoki Masashige was a 14th-century samurai who fought for Emperor Go-Daigo in the Genkō War, the attempt to wrest rulership of Japan away from the Kamakura shogunate and is remembered as the ideal of samurai loyalty.

His origin has not been validated and it was merely six years between the start of his military campaign in 1331 and his demise in 1336.

He received the highest decoration from the Meiji government of Japan in 1880.

Legend has it that Emperor Go-Daigo had a dream in which he was sheltering under a camphor tree (“kusunoki”), and that this dream led him to the surname of the warrior who would support him.

Kusunoki Masashige is a hero because he “stands in the history of his country as the ideal figure of a warrior, compact of civil and military virtues in a high degree.”