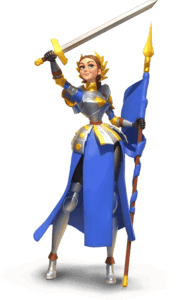 France | The Maid of Orléans

Joan of Arc is considered a heroine of France for her role during the Lancastrian phase of the Hundred Years’ War, and was canonized as a Roman Catholic saint.

After the Bishop Pierre Cauchon declared her guilty she was burned at the stake on 30 May 1431, dying at about nineteen years of age.

In 1456, an inquisitorial court examined the trial, debunked the charges against her, pronounced her innocent, and declared her a martyr.

In the 16th century she became a symbol of the Catholic League, and in 1803 she was declared a national symbol of France by the decision of Napoleon Bonaparte.