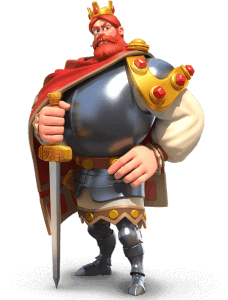 Frederick I, also known as Frederick Barbarossa, was the Holy Roman Emperor from 1155 until his death.

He combined qualities that made him appear almost superhuman to his contemporaries: his ambition, his skills at organization, his battlefield acumen and his political perspicuity.

Among his contribution to Central European society and culture include the re-establishment of the Corpus Juris Civilis, or the Roman rule of law, which counterbalanced the papal power that dominated the German states since the conclusion of the Investiture Controversy.

Frederick died in 1190 in Asia Minor while leading an army in the Third Crusade.

If you are using Frederick and going into PvP fightings in the field a lot, this is probably the best build for you!

We reduce the leadership talents  and distribute the points into Skills talents. What this does is going to be maximizing the nuking capability of Frederick. I suggest this hybrid build should be used when you are attacking governor cities and not so much in the PvP fights in the field. But since this is a hybrid build, it is acceptable to use for attacking into the field.

This is a good build for you guys if you want to build have Uncle Fred a little bit of a flexibility.

This is going to be really good when you’re trying to attack governor cities, flags and fortresses.