Complete guide regarding the new 5 vs 5 game-mode in Rise of Kingdoms, Champions of Olympia.

Champions of Olympia is such a fresh air into the Rise of Kingdoms world! This new mode is super fun and pretty addictive. It is F2P friendly than any other game mode or event.

During this event, you will join 5v5 battles of 10 minutes, fight against the enemies to capture the Olympia flags. Hold the flags as long as possible to earn more points and win the match!

This is like a MOBA game style, which is very interesting if you want to try something new in the game! Champions of Olympia is a 5 vs. 5 game mode.

Each player will be able to use 3 marches with given troops.

The only buffs that work here are city skin and equipment stats.

Player can invite 4 other friends to the same team or can just randomly find the matches.

A match lasts for 10 minutes.

Players need to do the battles to capture the flags and start earning points while holding them. The longer you holding it, the more points you get.

Capture the flag by staying in the circle around it for 5 seconds.

If both teams are inside the circle and fighting, the team that has the most marches will keep maintaining the flag if it’s theirs, or start counting to 5 to capture it. 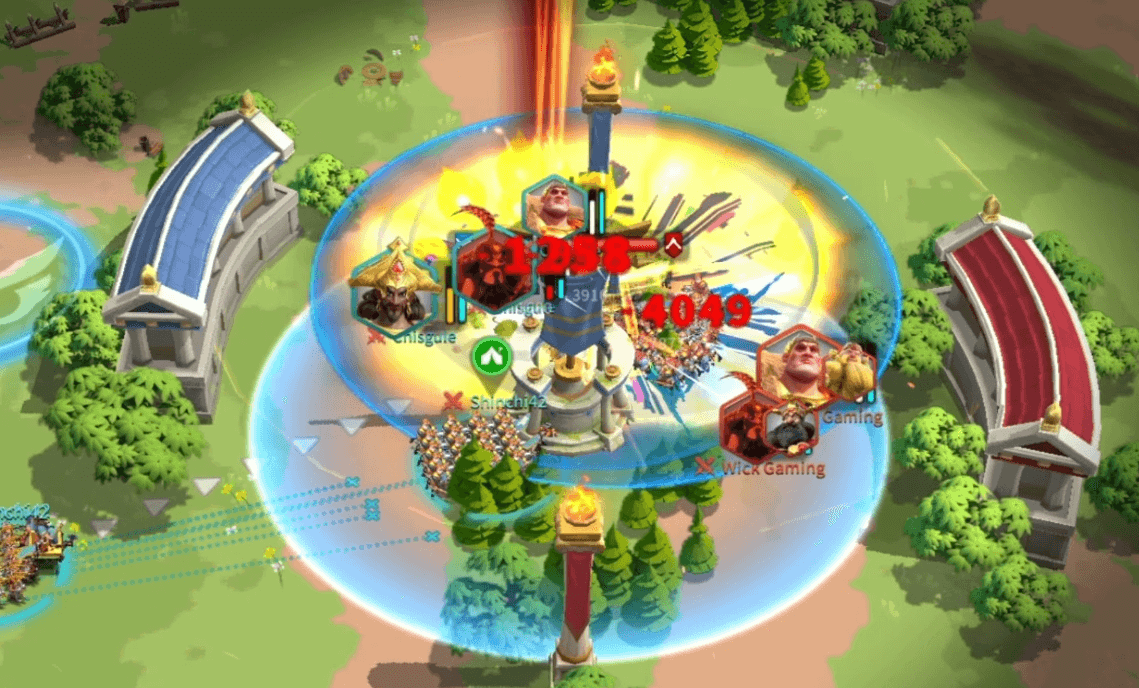 You have to battle inside the circle because you need to bring as many marches into it as possible. You will not be able to see the enemies on the map if you or your friends are not close to them.

There is a bar in the circle showing the score of each team based on the number of dispatches you have. The more marches you have inside the circle, the faster you can capture it.

After capturing the flag, you can move your armies to the small circle nearby to heal your troops. It takes about 20 seconds to fully recover your troops. 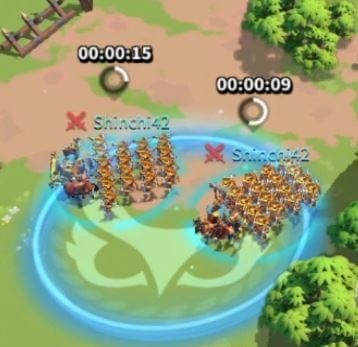 You have to choose the skills at the beginning of the match. There are 4 skills you can use in the battle via the menu at the bottom right of the screen, including active and passive skills. There are skills that buff damage, speed, heal, or even turn you into a watchtower. 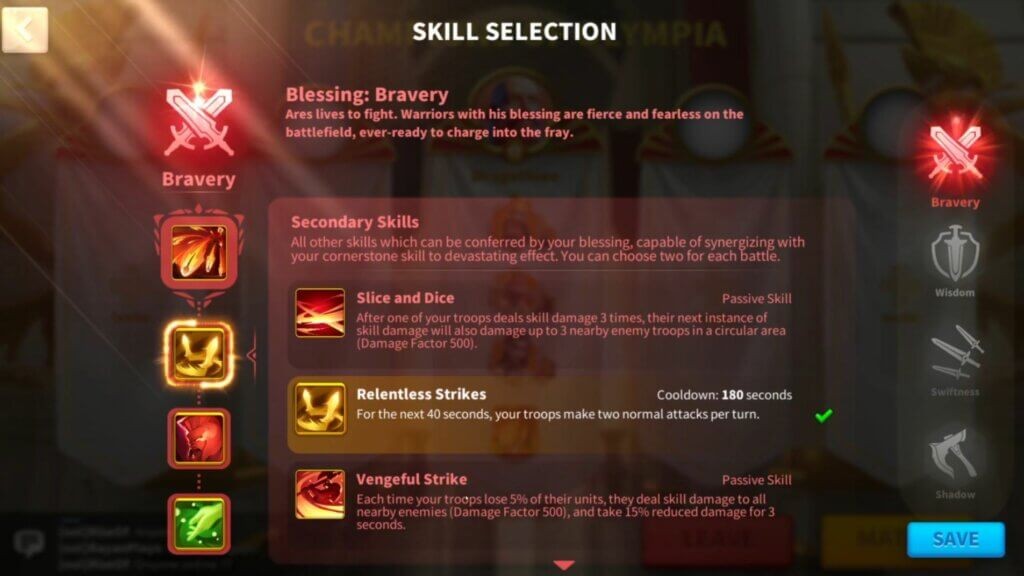 There is also a new type of health bar in Champions Olympia, which is called Morale. It is the blue bar next to your HP bar.

When you are surrounded, when a nearby teammate falls, or when you lose a type of troop, your morale falls, making your fighting power decreased. The Morale regens over time.

If your marches die, it takes 60 seconds to respawn. However, if you already own a flag, you can revive them much quicker, in just 20 seconds!

Don’t forget that there is a mini-map at the top right of the screen where you can quickly see the situation of the battle, how many flags you have captured, where your friends are, etc. to keep things balanced. If you focus too much in the middle lane, you could lose the other lanes, making you lose the entire battle.

You have to use the Legendary commanders in this event for now. Hopefully, this will be available for Epic Commanders also in the future!

Tips for Champions of Olympia

Each governor can choose a Blessing. Each Blessing lends itself towards a different fighting style by granting players complementary abilities and skills which can help you attain victory.

Bravery: Ares lives to fight. Warrior with his blessing and fierce and fearless on the battlefield ever-ready to charge into the fray.

Recommended Skills for Each Role

At the moment, we only have a few skills available in Champions of Olympia. However, it is still super important to use these skills in a right combinations to create the greatest possible impact in the battle.

Being an attacker, you must have strong damage output

As a defensive position role, you must use infantry commanders in most cases!

A role focused on contributing more to the team by capturing flags and moving quickly around the map to support each position.

Players can use a variety of skills but nevertheless, it is important to have “Marching Tune” to cause great damage and support the victory. For the march speed, use the skill “Swift March” to arrive and support each flag or capture quickly.

There are 4 skills you can use in total, including 1 active and 3 passive skills. Players must choose a specific skill for each skill slot from the skill list!

Allows your troops to change into an arrow tower, dealing direct damage to a nearby enemy troop once every 2 seconds (Damage Factor 1,000).

Troop will remain In arrow tower state until actively changed back by the Governor (tap on the troop to see the transform button). Each troop has an individual transformation cooldown of 120 seconds.

If the primary commander of a troop in tower form has the Integration talent, the tower can attack two enemies at the same time.

For the next 40 seconds, all troops gain a stack of Mastery with each normal attack for 10 seconds, increasing all damage dealt by 3% per stack. When a troop has 10 stacks of Mastery, all units will gain 30% increased attack, or 60% if the primary commander has the Cavalry or Leadership talent, for 20 seconds.

For the next 40 seconds, your troops will be healed every third time they take damage from a normal attack (Healing Factor 1,000). If the primary commander has the Infantry or Leadership talent, troops will recover Morale as well (Recovery Factor 200).

After one of your troops deals skill damage 3 times, their next instance of skill damage will also damage up to 3 nearby enemy troops in a circular area (Damage Factor 500).

For the next 40 seconds, your troops make two normal attacks per turn.

Each time your troops lose 5% of their units, they deal skill damage to all nearby enemies (Damage Factor 500), and take 15% reduced damage for 3 seconds.

Choose a visible area, and deal skill damage to all enemy troops in that area (Damage Factor 4,000).

Your troops immediately gain 50% increased march speed for 15 seconds, as well as 5 stacks of Mastery (all damage dealt +3% per stack for 10 seconds).

Choose a troop under your command, which will taunt up to 5 nearby enemies and take 50% reduced damage for 5 seconds. This troop also recovers Morale (Recovery Factor 500).

All your troops gain 30% increased march speed for 15 seconds.

Some skills can give governors new ways to control enemy troops. Affected troops will be marked to indicate which skills affect them.

These effects are as follows:

Taunted enemies must target the taunting troops with normal attacks.

Buffs have some restrictions in Champions of Olympia!

Buffs that are activated after leaving the battlefield midway cannot take effect in the battle.

Additionally, the following buffs will not take effect under any situation:

Tap the zoom button on the mini-map to see the big map.

Tap a target on the big map to give orders to your troops. For example, tapping an allied troop’s icon will order your troops to rally to them. Tapping an empty space on the map will send a “Watch Out” message. 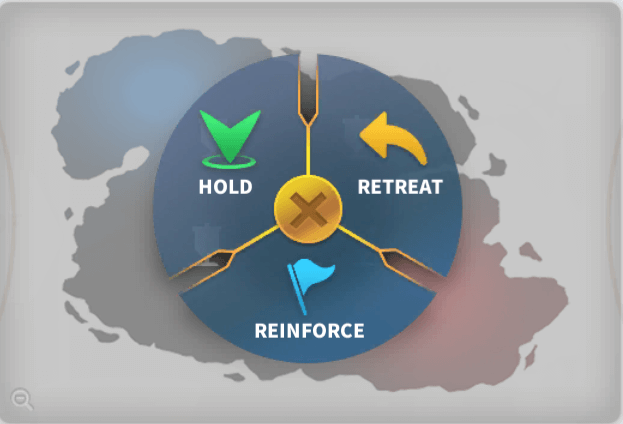 Tap and hold a target icon and signal your teammates to hold on, retreat or reinforce after sending a signal, you must wait a little while before sending another one.

The MVP, or most valuable player, of each game is awarded to the player who performs the most actions per minute and provides the most support to the team.

Sometimes, you can see MVP players having fewer kills than others because of the constant crucial support he/she provides in each part of the map.

Capturing flags in from enemy positions is one of the strongest factors of the score system. Each tick that you increase in the flag marker in your favor is very crucial.

It is also important to not let your troops die too much.

The rewards are very easy to obtain and there are two sets of them:

And you can obtain a ton of rewards by completeing the following achievementts:

1. Your city hall must be at least level 11 to enter the “Champions of Olympia” battlefield.

2. Each Governor can deploy 3 troops, each of which will use units provided by the system. Troops cannot be changed once the battle starts.

3. Governors are allowed to equip special skills to gain an edge in battle.

4. This battlefield’s format: Two teams of five Governors fight for control of Olympia flags, occupying them for a steady stream of points. The team with the most points will be declared the winner.

5. Once you’ve captured an Olympia flag, a nearby Replenishment Point will be activated. If you move your troops there, you will be able to restore their units or revive fallen troops. Replenishment takes time and will be interrupted if your troops get attacked or actively move.

6. Fallen troops will spawn at the Spawn Zone even if you don’t revive them at a Replenishment Point.

7. While on the battlefield, your troops will have a Morale counter. If their Morale is reduced to zero, their fighting power will be dramatically decreased.

8. You will earn rewards based on the number of victories you achieve. Up to three victory rewards can be won in each event period.

This time, you will rewrite the lost history.

Will you fight with strategic wisdom for the Delian League of Athens, or revel in the heat and chaos of battle with the Peloponnesian League of Sparta? Who will the gods favor, and which party will honor its patron deity with victory?

The choice is yours.

Some tips and info are shared by Allaboutfootball23! 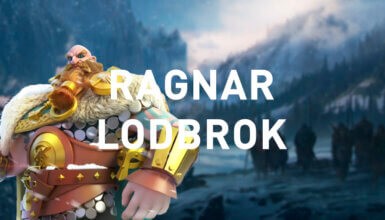 Ragnar Lodbrok – Legend of the North 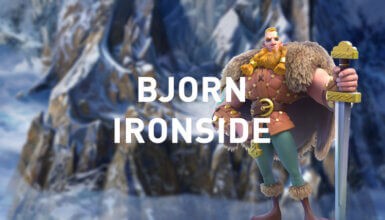 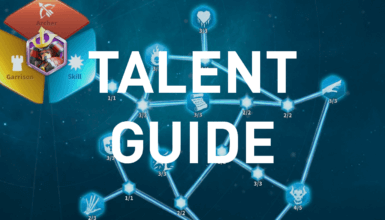